Digital art is omnipresent, inescapable, and full of value – a value that (as a society) we are currently ignoring. It is accepted that many people’s lives are filled with background music, and now, alarmingly, with the rise of ‘Multi-Tabbing’, multimedia digital art is in danger of becoming a background commodity; it is time for our artists to pull their socks up and start creating digital art fit for a digital world.

The problem starts at the top, with the way that arts organisations devalue their own digital artwork by giving it away for free.

Yes, the issue is more nuanced; of course everyone wants to live in a society where art of the very highest quality is freely available for all. However, the behaviour of summer opera companies – who have charged premium prices for live, ‘Covid secure performances’, and then release a film of the performance for free – would suggest otherwise. Implicit in this practice is an acknowledgment that the value of a live performance, alongside the feeling of community between audience members, cannot be captured digitally.

There is no replacement for live performance, and there never will be. The sooner this is accepted, the sooner the quality of digital art will improve.

The problem with these captures is not just that they lose some of the benefits of a live concert but that they make no attempt to offer anything that cannot be experienced live, no different really to the proud parent or carer who films their child’s nativity play. It is time to explore the possibilities digital art allow that are simply impossible in a concert setting. As an example, why not film an orchestral piece from an individual player’s perspective? The digital audience would share with the player the visceral feeling of playing their instrument, witness the intra-player relationships, and become party to the secrets of page turns and counting. Sound engineers are now so skilled that they could even give an accurate aural impression of what that player experiences, all things that would be impossible in a traditional concert setting.

In general, the artistic community has become lazy in their capture of performances. Online audiences have become accustomed to seeing cameras, microphones, wires, and other recording paraphernalia in shot in a way that would be decried in even the lowest budgeted soap opera. It may seem a petty gripe, but, every time a microphone is seen – the magic of the music is broken. For a discipline founded on attention to detail and constantly striving for perfection, it is time for these mistakes to stop.

There is another, equally serious, danger. Over the last century, audio recording has led to a far more homogeneous approach to music making. Musical artists have become more conscious of the musical decisions they take, aware that they will be committed to eternity. The danger for digital art is that performers become preoccupied with their visual behaviour and appearance. At least with audio recording, the artist’s worries are still focused on the way they are making music – on how they sound. With film, anxiety about the way artists appear could have catastrophic effects for the music making. Unfortunately for conductors, the most aesthetic gesture is usually not the gesture that can best communicate with their fellow musicians. It is all too easy to imagine a horrific scenario where conductors are ‘rehearsing’ their moves for the camera, and ignore their duty, passion, and love for the music.

The solution seems simple. By trusting and allowing digital artists, directors, and technical teams to do the work they have been trained in – and have a passion for – the pressure is lifted off the musicians to carry both the visual and musical narrative. In doing so, not only does the end product go beyond a simple capture of the live performance, but, if the opportunity and trust is given to a director to translate live performances into digital artworks, this can become part of the financial model for musical organisations. People are prepared to pay money to rent the latest blockbusters from Amazon and Netflix, so there is no reason to suppose that the very same people would not pay for high quality, imaginative, and inspiring digital art.

It is simply not good enough to transfer live art to the digital world; it is time to trust musicians with the music and entrust digital artists with its portrayal. 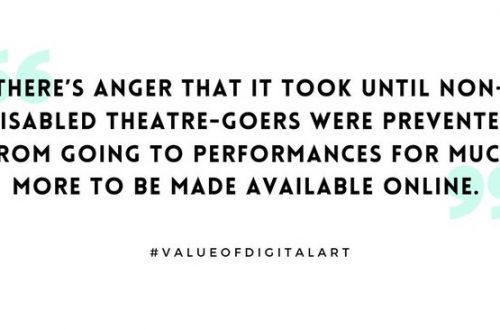