When Crispin first proposed the idea of staging a ‘pop video’ to reimagine Handel’s ‘Cara pianta’ from Apollo e Dafne, I remember thinking that sounded like a smart idea; opera has long exploited different cultural traditions to inform production values and there was plenty of scope to play around with this. We wanted to produce a video that fully respected the music performed, but treat it in such a way that the door is opened to a wider appreciation online, with a particular emphasis on the younger audience that does not attend our concerts but may still very much appreciate our repertoire. Without trivialising or sensationalising any of the music, we wanted to focus on identifying a dramatic visual expression which served the ethos and score of the original.

However, when we discovered that the pop video that Crispin had in mind was the highly dangerous and technically challenging video No Surprises, you could say we were taken aback.

Handel’s ‘Cara pianta’ is the final setting in the story of a narcissist, Apollo, who expresses strong, unrequited love for a woman, Dafne. After being chased by Apollo, Dafne cries for help and is miraculously transformed into a laurel bush to escape Apollo’s advances. Upon seeing this, Apollo breaks down and mourns this change. Similarly, Radiohead’s No Surprises is tinged with grief as the singer contemplates the futility of life. When the water level rises over the singer, there is a visceral sense of claustrophobia, of grief and loss; and the moment that the water subsides feels like the release from it is a baptism into a new life of wise manhood.

We recorded the music a few weeks prior to filming, to ensure the sound was of the highest quality, and then we filmed the death-defying video in Crispin’s cramped garden shed over a muggy summer’s weekend. Crispin constructed the ‘set’, complete with lighting fixtures, cameras and of course the astronaut-helmet-system that you see James wearing in the final video. We tested the draining system using a dummies head until we were sure that the system was safe. Despite our tests, there were still some challenges that we hadn’t anticipated. For instance, the diving helmet started to mist up with James’ breath so we had to have a heater pumping in warm air and when James’ hair started falling over his face, we had to grip it in place with hair gel. 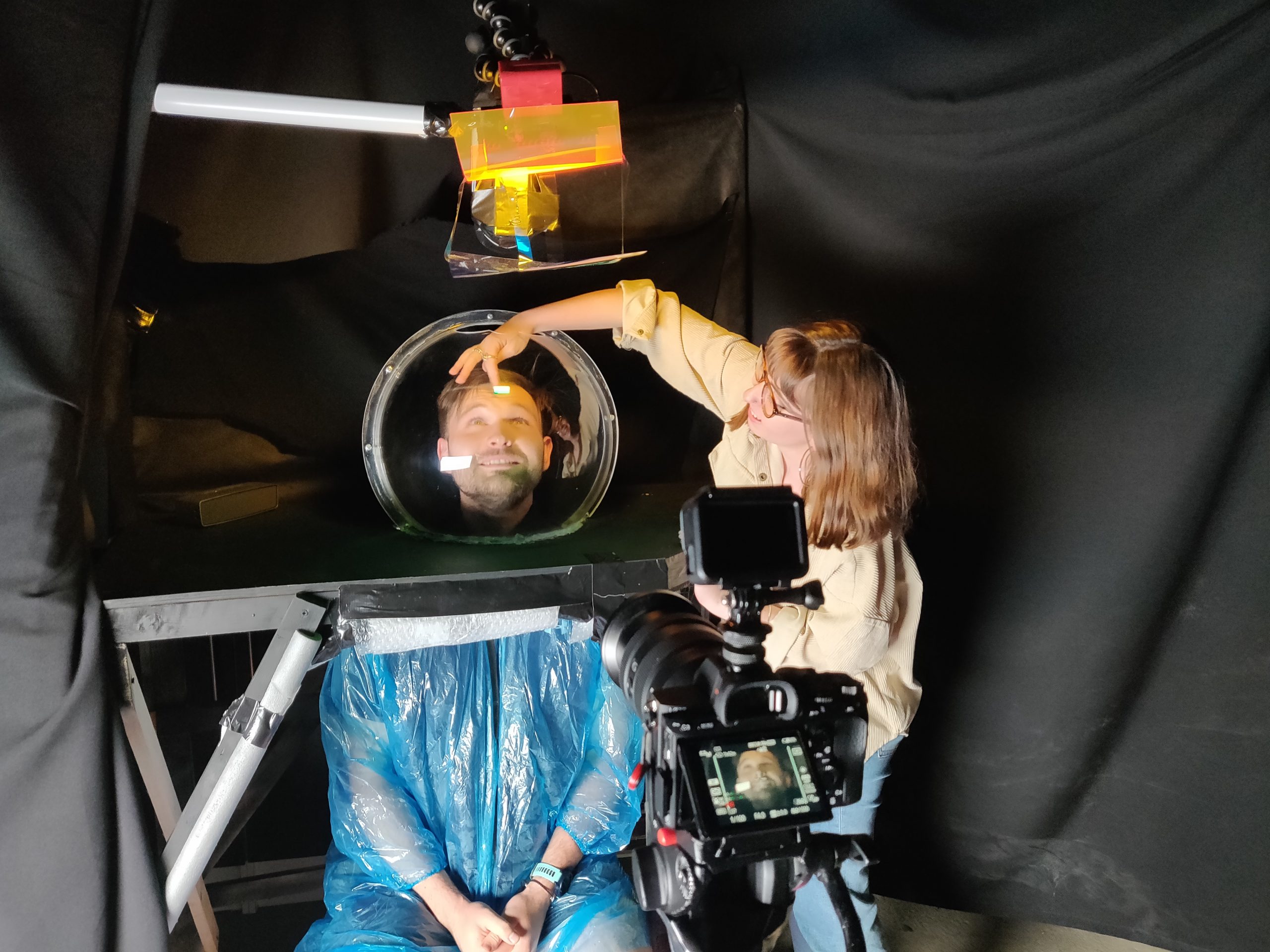 I spoke to James after the filming and asked him about his experience.

“To prepare for this video, I’d been practising holding my breath for prolonged periods of time and I was confident it would be a one-take-wonder. However, I hadn’t accounted for the freezing cold water direct from the hosepipe. The first attempt I only managed to stay underwater for 5 seconds; the shock of the cold and the panic watching the water rise around me cut my breath completely. Take two and three were better, but still way off the required amount of time. After a couple of hours sat in a paddling pool in my swimwear, we needed to warm up; we had a cup of tea and I started Googling ‘holding your breath underwater’ and ‘Freediving for Dummies’. I discovered the technique of getting rid of all your air before breathing in deeply and then gulping extra air into your lungs before going under. We gave it a go and finally, we managed it! You can see in the video the sheer concentration as well as the discomfort and panic in my face which fits so perfectly with the mood and content of the song. The final result has an intensity that’s perhaps hard to recreate without the actual risk of death.”

If music is good, it’s good regardless of its genre.

This film is sponsored by Mark Allen Group, Gramophone

*James Newby is an alumnus of our Rising Stars of the Enlightenment singers’ scheme.