On Thursday 12 March, my team and I were discussing the possibility of working from home. By Monday 16 March we were evacuating our office at Kings Place in stunned silence as we mentally processed the devastating consequences of the coronavirus outbreak.

The rest of that week was a blur of cancellations, refunds and video calls to discuss how we might create something positive during the crisis. It was Crispin, our CEO who suggested that we produce an online version of our cancelled concert Bach, the Universe and Everything (BUE); an event that combines music and science in a reimagination of the traditional Sunday service. The proposal started like most OAE adventures do, with a flurry of enthusiastic emails. By that evening we agreed that we would premiere the event on our YouTube channel at 11:30 am on Sunday 5 April. We had never done this before, and we had less than ten days to pull it off, but OAE likes a challenge.

Steven Devine, our Principal Keyboard player and director, got the ball rolling by recording the continuo of Cantata BWV 172 on the harpsichord. The harpsichord features throughout the cantata, and it includes the harmony within it, so it was the logical starting track to guide the pulse and the intonation of the music. The next layer to be recorded on top of Steven’s track needed to be a bowed bass instrument to provide the structure and the bass line for the rest of the ensemble. This was provided by Jonathan Manson, our Principal Cello. In the video, you can see that Jonathan is wearing earbuds as he is listening to Steven’s recording while he is playing. 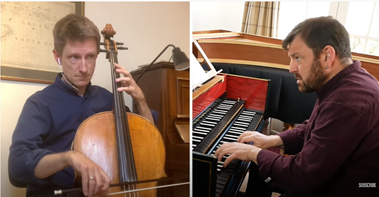 Cecelia Bruggemeyer, our bassist, noted that when she came to record her part, not only did she need to wear earbuds to hear the harpsichord and cello recording, but she also chose to position her phone on her music stand so that she could watch them playing too. “There is a two beat rest in the aria, and I needed to see Jonathan and Steven so I could sense precisely when to come in.”

I asked her if she enjoyed the recording process:

“It was a mixed experience. On the one hand, it was lovely to see my dear friends on screen and to feel like I was playing as part of an ensemble again. On the other hand, it was very challenging to adjust the lighting and find suitable sound quality on my camera. The process highlighted the small adjustments we constantly make when we’re together in rehearsal and raises a philosophical question of what it means to be in-tune. I’m also really curious to know how an online audience perceives our playing compared to a live concert audience.”

Another essential component which lends such a triumphant tone to the Cantata is the vibrant use of trumpets and timpani. Our Principal Timpani, Adrian Bending, provided one of the last layers of the recording.

“It was an interesting challenge to record my part for BUE.  I soon discovered that it would be a complete waste of time to attempt it without being able to see my colleagues. From large movements of a bow, to the slightest twitch as David Blackadder raised his trumpet to play; I found it vital to see all of them in order to place my notes correctly. And so, I set up my laptop beside my music stand, and made my colleagues’ images as large as possible.

Getting the sound right also proved to be a demanding task, as I needed to be able to hear myself and the recording at the same time. I experimented with several different headphones before I discovered that the best were the ones I normally use for running and cycling! They don’t actually go in your ears; the sound is transferred via the bones behind your ear. The sound is superb, yet you can hear live sound (rather important on a bike!).” 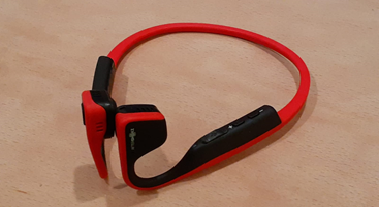 As we were racing against time to complete the project, the choristers were sent a reference recording which Crispin whipped up using an app on his tablet called Cubasis. If this were a live concert, our singers would have professionally printed music scores to refer to. Instead, off-camera many of them read from their tablets and laptops.

In total, there are twenty-six artists featured in the BUE video. After each of them had recorded their part, they then sent their video to Zen Grisdale, our Digital Content Officer, who layered them together using Final Cut Pro video editing software. Building the full programme for the BUE event was a lengthy process. The screenshot below shows just ten of the eighteen iterations of the final video, as new layers were added. These videos are purposefully marked as ‘unlisted’ and not visible to the public. 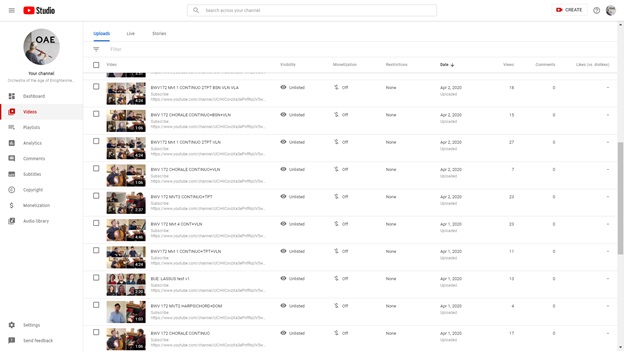 Every live performance of BUE starts and ends with a few words from Crispin Woodhead, our CEO, which also needed to be recorded. Crispin taped a sheet of green fabric to his wall at home so that the BUE artwork could be applied to the background in post-production.

“It took me 157 goes to record my bits. When I watched the playback, I realised that I looked like a cardboard cut-out and that it just wouldn’t do. I then had a crisis about my hands which seemed to lunge to fifteen times normal size whenever they rose up.

I also found it dementedly hard to form a relationship with the lens on the camera. It was peering coldly back at me like that ghastly Kubrick Hal thing. In crisis media training, I was told that if you look at the camera, everyone thinks you are a liar. But does the same rule apply to YouTube?

All of this rather aggrandises my minimal cough and a spit in a gargantuan collective effort, but if you had gone through hours and hours and 157 separate takes, you too would think you had just done the complete Wars of the Roses. I am now obsessed with light balance and framing and feel better prepared to record the next one.”

The night before the YouTube premiere, Anna Bennett, our star Head of Press sent out a reminder email to our mailing list, and finished the last of the social media announcements. The digital programme was published and the finished video was uploaded to YouTube ready for the Premiere. We talked on Microsoft Teams about how relieved we felt that we had met the deadline but also physically sick at the thought that something might go wrong with YouTube. The next morning around 11:20 am, the OAE administration team, musicians, board members and trustees were sending messages of support through our OAE group WhatsApp in anticipation of the premiere. 11:25 am. It was both comforting, but also terrifying to think how many people were counting on this being a success. 11:28 am. The YouTube viewer count quickly rose. 11:29 am. This was nothing like preparing for a live concert. This was totally out of our hands now. And then, at 11:30 am, like clockwork, the event started to play. The sound of our Orchestra performing BWV 172 ‘together’ after these traumatic three weeks was more sweet and emotional than almost any other performances I’ve experienced before. It was all the more special to see how many people across the world were joining us on YouTube to share in this moment of resilience.

“Although it took me a long time to record my part (because you’re never 100% happy with a recording…) I was surprised, but also very pleased with the result of what we had put together. If nothing else, our achievement in working together in these very difficult times is a testament to our resourcefulness. I’m sure that we will look back fondly upon these days, and what we had to do in order to keep “performing” as best we could.”

The next online Bach, the Universe and Everything is scheduled for Sunday 10 May, 11:30am BST, youtube.com/OrchestraEnlighten

Please support the OAE by subscribing to our YouTube channel. Hit the red ‘YouTube’ button below to help us reach our goal of 100K subscribers before September! 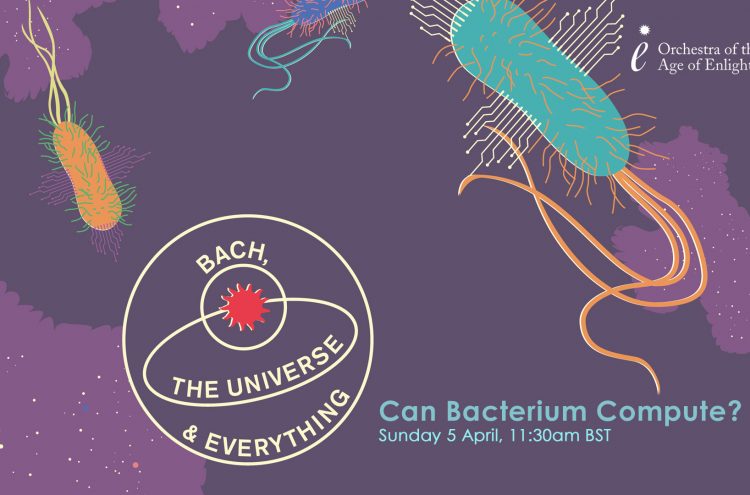 Bach, the Universe and Everything: Can Bacterium Compute? Click the 'see more' button below to download the programme